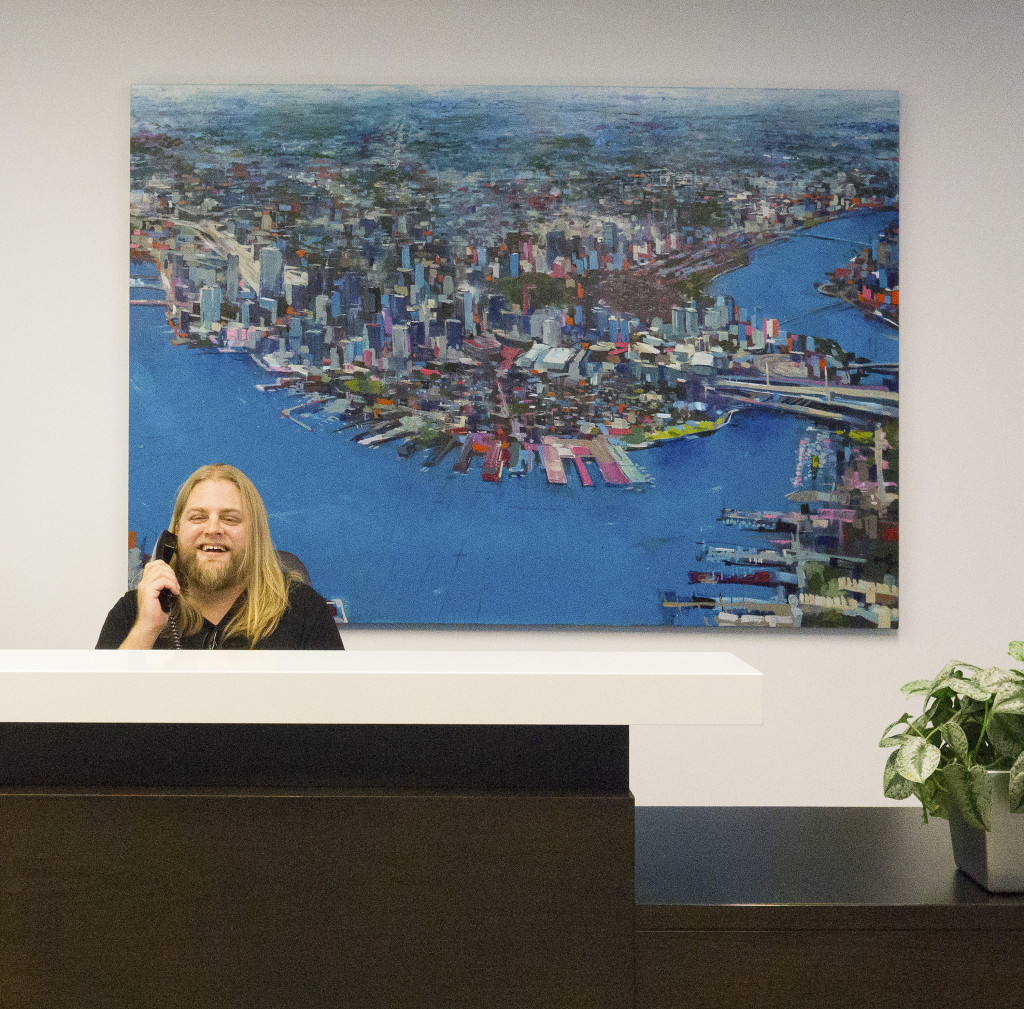 His painting studios are in Abington, MA

4/18/14 Artist Adam O’Day sees Boston in a different light – Boston Globe Article: A modern mix of Expressionism and Impressionism, sometimes with a street-art twist. “I just try to paint exactly how I want to and how I feel like I need to. That way, whatever I paint is going to be my hands.”

12/19/13 Temporary Land Bridge with a photo review of “Scraps” at Distillery Gallery.

12/17/13 Boston Hassle gives more props: but this time it’s a spotlight on GUMBO at Voltage.

10/1/13 Boston Hassle gives props: Cool hangout spot you probably don’t know yet, featuring a local art heavyweight.  Beautifying Boston’s walls for about a decade, Adam O’Day came here as an Illustration/Design student at the Art Institute of Boston.  In the past few years, he has been blowing  up with solo exhibits, group shows and work in permanent collections seemingly everywhere.   The Compass is crushing on his use of bold colors and love of cityscapes.   His painting and multimedia pieces will engage you from across a room and lure you over for closer inspection.  Grab one of the best cups of coffee in town and see what’s hanging at this chill North End meets West End cafe. – See more
Equal Exchange Cafe | 226 Causeway St. Boston MA 02114

6/7/13 – Write up on Wet Paint event to produce artwork for The Art of Well Being at The MFA: Wet Paint Event in Brookline Article

Through an individual’s personal experiences, day-to-day interactions, and general outlook on life, a perspective is formed. More often than not, this is translated into the mundane. For example—80 percent of city landscape paintings are trite and uninspired.

Thankfully, there are artists like Adam O’Day who transform familiarity by dissolving structure.

O’Day’s subject matter is gritty and destructive—he harnesses nuclear surroundings and apocalyptic themes with lush, inviting colors that create an inhabitable space. We recently chatted with O’Day, discussing his work leading up to a group show, Don’t Give Up The Ship, at Orchard Skate Shop. Read the full interview here.

“Adam’s paintings are so popular because although he’s generally working with traditional city skylines, he’s adding a fresh, bold perspective to the piece,” says Liza Hall, curator at Turning Art. “The result for the viewer is a broadly recognizable foundation that quickly becomes dynamic and engaging in a new way.” Click for full article: CBS Boston

Shakefist Magazine Review: A Night of Art and Fashion at Misha Nicole By Sabina Frizell

Featured in Boston’s Weekly Dig, November 17th, 2010 for group show Urbanites at Distillery Gallery: “Living in cities definitely inspires me,” says artist Adam O’Day, also a Distillery resident, who created work specifically for this exhibition. O’Day will show 2-D and 3-D work, including some oversized pieces. This urbanite has lived in Kalamazoo, Mich., Atlanta, Washington DC and Boston. “I love living/working in the Distillery. Since moving here, my art is influenced by the griminess and quirky residents. There are lots of found materials for mixed-media work. I always find something in the garbage that I can reuse for creating art.” O’Day’s work has been called “scribbly and violent,” and his deeply colored Boston landscapes, often large and layered, are both dark and bright at the same time. The tone, when combined with pinks and yellows, stands as powerful, lovely and eerie while ruminating on city explosions, destruction and fire.

Make It Together, presented by Distillery Gallery, show featured in the Boston Phoenix, August 19th, 2011. Cave Monster Stalking a Unicorn by A. O’Day and KDONZ in full color in ad.

One for the Ditch, Collaborative/Solo Show at Arch Gallery, Allston, MA, 8.23.14

Don’t Give Up The Ship, show with M Hart, S Chasse and R Larrow at Orchard, Allston, MA May, 2012

The Dead Will Rise Again, Group Show at All Asia, Cambridge, MA, Oct, 2008

For the Love of Music, Group Show at The Middle East Rock Club, Cambridge, MA, Sept, 2008

Out of the Blue Gallery, General Collection, Cambridge, MA, Jan-Dec, 2008