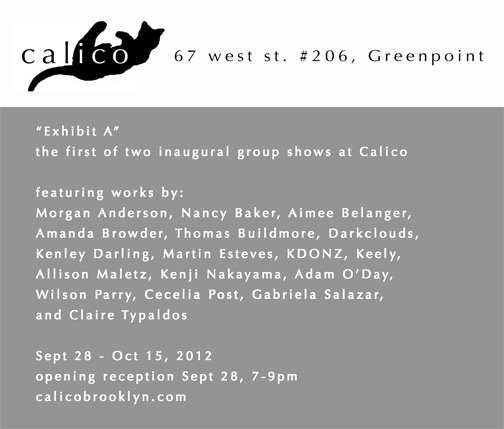 For Immediate Release:
Calico Presents “Exhibit A”
the first of two inaugural group shows
September 28 – October 15, 2012
Opening Reception: Sept 28, 7-9pm
67 West St, #206, in the Greenpoint Terminal Building
Brooklyn, NY 11222
contact: Scott Chasse, Director
calicobrooklyn@gmail.com
www.calicobrooklyn.com
gallery hours: Fridays, 11am – 5pm and by appointment
“Exhibit A”
According to Wikipedia, “An exhibit, in a criminal prosecution or a civil trial, is physical or documentary evidence brought before the jury.”
Calico, a new art venue in Greenpoint fronted by neighborhood artist, Scott Chasse, is ready to present its case: art galleries are still relevant, they’re just different now. “Exhibit A” is the first of two inaugural group shows at the modestly sized space located within the historic Greenpoint Terminal Warehouse building. The evidence, in the form of dual launch-party group shows “Exhibit A” and
As technology continues to be a game changer in virtually every aspect of life, basic one-on-one human interaction remains irreplaceable. Chasse, a working artist and arts organizer for the past 10 years, has learned that creating, presenting, viewing, understanding, and appreciating artworks are evolving concepts and we live in a time of full of unchartered territory jumbled with time-honored traditions.
Calico, referring to the type of cat known for its medley of colors, will present a wide range of established artists and will draw from Chasse’s varied experiences over the years as both artist and presenter. The space and the exhibits featured within it will not be strictly DIY nor “white cube”, but rather a deliberate mix of elements from both. Fellow artists from New York, Boston, New Hampshire, and Philadelphia will be represented in “Exhibit A” and “Exhibit B” (“Exhibit B” opens on October 19th).
“Exhibit A” includes works by: Morgan Anderson, Nancy Baker, Aimee Belanger, Amanda Browder, Thomas Buildmore, Darkclouds, Kenley Darling, Martin Esteves, KDONZ, Keely, Allison Maletz, Kenji Nakayama, Adam O’Day, Wilson Parry, Cecilia Post, Gabriela Salazar, and Claire Typaldos
Please join us for the opening reception on Friday, September 28, 7-9pm, sponsored by Narragansett Beer.